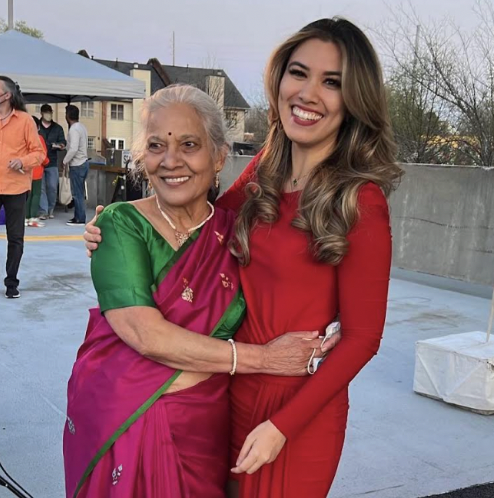 When I was in elementary school, my clever librarian, who understood the needs of changing and diverse communities, would recommend books for the insatiable reader in 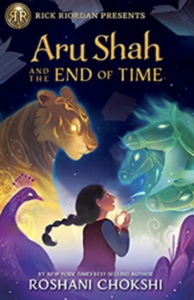 me.  One day in sixth grade, the book she suggested was Aru Shah and the END of TIME .  I was immediately intrigued.  Until then, I hadn’t read more than one or two middle-grade novels that featured an Indian-American girl as the main character. I opened the book and after a few sentences, I knew witty, incredibly funny Aru and I would hit it off very well.  Aru Shah and the End of Time by Roshani Chokshi earned Time Magazine’s 100 best fantasy books of all time, which puts the author in the same elite company as J.K. Rowling for her Harry Potter children’s series.

Chokshi reimagines the great ancient Indian Sanskrit epic, the Mahabharat, but makes the protagonists powerful young women.   What sets her writing style apart in all her award winning books are her vivid and lifelike descriptions, her precise words leap off the page as if colors have sounds and light has taste.  It is magical mastery of language, evoking fantastical and otherworldly sensations. Her novels have been translated into more than two dozen languages and often draw upon world mythology and folklore.

As I explore creative writing in high school,  it is truly exciting to speak to and learn about my favorite author Roshani’s journey via zoom from her Atlanta home for my inaugural story as a contributor for Omniscient Perspective  for Saris to Suits

(ATLANTA, November 2022)   When Roshani “Rosh” Chokshi was growing up as a Filipina-Indian American girl in the South, she noticed something: none of the main characters in children’s books and TV shows she loved looked like her or had names like her or her siblings. There were “Alice’s, Charlotte’s, and “Nancy”s, but to her knowledge no “Roshani’s”, a Hindi name which, in her case, appropriately means brightness or light. 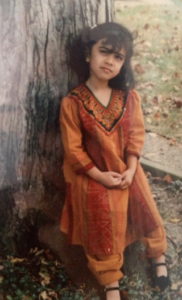 Roshani Chokshi, a bright light as her name means

Even gifted Asian-Americans who were in popular media were pushed to the side, never the star or the main character that anyone and everyone admired. Neither did she see strong female characters that she could relate to. Not perfect princesses or extraordinary super heroines, and “when that happens,” she says, “there is a very deep desire to make yourself visible.”

Roshani, 31, is hailed for the unique and diverse representation she imbibes in her books, challenging both cultural stereotypes and what it means to be “feminine”. She’s surrounded by strong American women of South Asian and Asia Pacific heritage. All the women she’s known in her immediate family are impactful, determined, and powerful in their own ways, and Roshani infused these traits,  or what she describes as, “spectrum of strength” into her ordinarily extraordinary characters.

A stunning, multiracial, petite woman with long hair, Roshani’s unique, cultured childhood shaped how she viewed the worlds of literature and entertainment. According to her, “the cultural bridge for us was folktales; it was mythology, ghost stories, fables, and fairytales.”  One particularly influential storyteller was her inspirational ba, or grandmother, whose stories she based her bestselling middle-grade series Aru Shah.   Here’s a video on how Rosh &  Ba embarked on storytime and storytelling journey.

Another one of Roshani’s childhood passions that remains to this day is Sailor Moon, a popular Japanese manga (a type of animated show) featuring schoolgirls that discovered that they possessed innate, universe-saving powers. She continued to explore these themes in her own writing. The novel idea of seeing strong, independent girls and women in the show resonated with her. 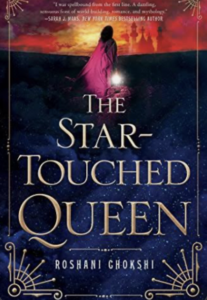 “The importance of having female characters like this is to show us that there is a spectrum of strength,” says Roshani.  After graduating from Emory University, she started law school, though she recognized being a lawyer wasn’t exactly where her passions lay.  She felt left behind because her peers seemed to have chosen a clear career path.  At that moment, when she felt, in her words, “invisible to the world”, she began writing what would become her acclaimed debut novel, The Star-Touched Queen. Her first novel sold while she attended the University of Georgia School of Law, and she ultimately dropped out to pursue writing.

While writing bestselling The Star-Touched Queen, Roshani didn’t write for anybody but herself, re-exploring her passion for writing, which to her was an “exercise in joy and externalizing your emotions”. She didn’t even originally have the intent to get it published. Instead, she wrote because that was what allowed her to express her emotions. It was what made her happy.  Her parents and family were a huge support during this time, encouraging her to pursue what she loved and supported her decisions every step of the way. 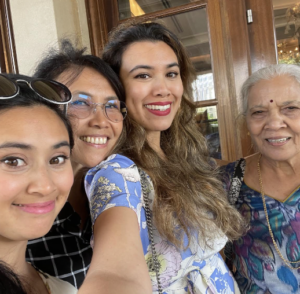 Women in Roshani’s life provide a “spectrum of strength”

Each of the important women in her life displayed strength in different ways and each of them influenced her uniquely. This inspired her own writing, in which the female characters she creates and writes about are all fiercely strong in their own individual ways.

Whether they are physically strong, incredibly intelligent, strikingly beautiful, witty beyond measure, Roshani’s girls and women fight for what they believe is right. Sometimes they aren’t sure of what is right, and other times they aren’t sure of themselves, or if they can accomplish what they set out to do. But that contributes to their strength, because what greater victory exists than winning over one’s own mind?

In a short span of time, she has authored more than a dozen notable books and literature. The Star-Touched Queen was followed by A Crown of Wishes, and subsequently The Gilded Wolves trilogy and Aru Shah quintet, and contributed to many other literary works collaborating with other highly esteemed authors.   Her accolades include 2022 Georgia Author of the Year for Bronzed Beasts for young adults, the 2020 Southern Book Prize for the Gilded Wolves in the children’s category. 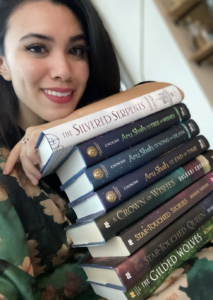 The Gilded Wolves series is a trilogy set in the 18th century in France.

“Roshani Chokshi’s Star-Touched Queen duology made its mark on the bestseller lists by blending Indian mythology with Western fairy tales to create a dreamy, romantic story. Now, with The Gilded Wolves, the time for dreaming has passed as she catapults us into a glamorous, high-speed heist set in magical Belle Époque Paris…,” writes Caitlyn Paxton in her review for NPR Books. “…..Almost all of our protagonists in The Gilded Wolves have their roots in cultures and places that have been colonized, and Chokshi makes it clear that many of the magical artifacts at the heart of the heist have been stolen from their homelands. It seems likely that in future volumes, this team of thieves may find themselves in a new, more social-justice oriented role, and that is a very exciting prospect, indeed.” 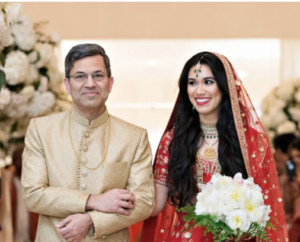 Roshani with her father on her wedding day, as she weds her Indian-American childhood friend

So, what is on the horizon for Roshani now that she has chosen to retire the Aru Shah series?  At a very young age she’s accomplished a lot, but there’s no stopping.  Inspired by her first year of marriage to her high school sweetheart Aman Sharma, The NYT’s bestselling author makes adult novel debut with The Last Tale of the Flower Bride, which is set to release on Valentine’s day in 2023  and she returns to the book promotion circuit.   Her advice for aspiring writers in her own words?  “Read widely and without judgment,” advises Roshani “...and to listen to people, ask questions, dig deeper and be curious.”

Advice taken to heart, and thank you Roshani Chokshi!  Aru and Chokshi fans like me have ‘A Crown of Wishes’ fantasy series at Disney branded TV for Disney+.  And grownups, who have never read Chokshi’s books, have the much-talked about debut novel to read for themselves why her books are repeatedly winning awards.

About the Author: Harini Logan, who’s in 9th grade, lives with her parents, brother, and dog, Milo, in Texas. In her free time, she enjoys reading novels, writing stories and scripts, watching movies in various languages, singing Indian classical music. Harini won the Scripps National Spelling Bee in 2022 and hopes to give back to literacy, a cause that is important to her.  In Sanskrit, Harini means an “angel” or “apostle”.

About the Mentor:  Founded by journalist/entrepreneur Pratibha “Patti” Tripathi, Atlanta-based SarisToSuits® focuses on building awareness to break down the barriers that constrain the advancement of women and girls.  Among the many hats she wears, she’s a mentor for high school students and young women who produce original digital narratives on trailblazers for Omniscient Perspective.  The Sanskrit name “Pratibha” means talent, ingenuity and splendor.  Her aim is to advance women’s empowerment, education, gender inclusivity, equality and social justice. 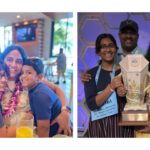