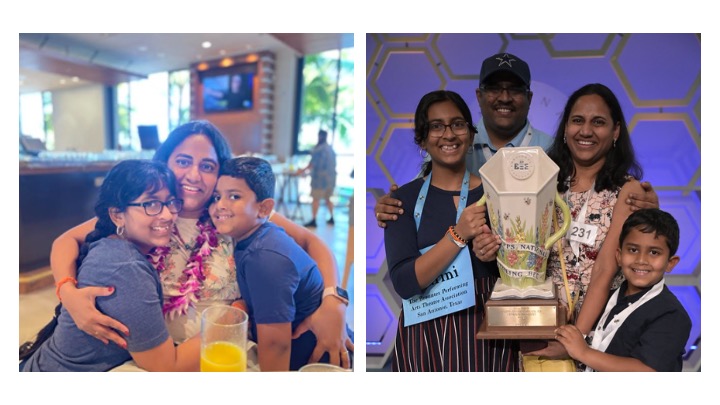 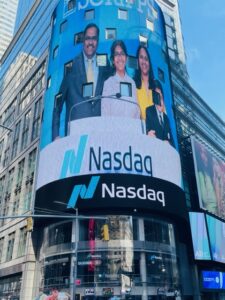 (SAN ANTONIO, TX:  September 9, 2022) After an eventful summer, the most recent Scripps National Spelling Bee winner Harini Logan began her freshman year at a private high school in San Antonio, TX.   Logan, who’s 14, has set her sights on her next big educational and career goals:  Gaining admission into a prestigious university to eventually become a physician with a graduate degree in business. 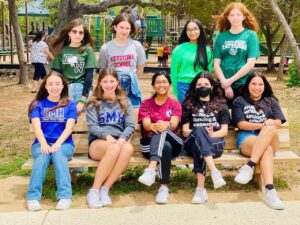 Until then, she plans to thoroughly enjoy the journey.  She attends a full-day of classes, then goes for drama lessons for two hours. This dictionary aficionado loves creative writing and plans to become a fiction writer.  Her digital narratives on inspirational young women and girls will soon be featured in the SarisToSuits Omniscient Perspective® column.  Her hobbies include Indian classical music, choir, piano, musical theatre and spending time with her friends and puppy, Milo.  Music forms an integral part of her life. She loves to sing, play the piano, and taught herself the techniques of the ukulele.

Her Mother, Priya, 41, is her daily event planner, role model, courier, and cheerleader.

“There has to be at least one dedicated parent to continually guide the child and for Harini, it was me,” says Priya, who earned an MBA from The University of Chicago Booth School of Business.  “I initially got into this to help her. But gradually I started to love, appreciate, understand, and even educate myself better in the process.” 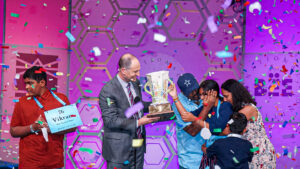 In June, Harini brought home the coveted Scripps National Spelling Bee title, along with the trophy and over USD 50,000 in cash and prizes.  She plans to save a majority of her winnings for her college education.  However, she is also interested in dabbling in the stock market and in giving some back to the community to advocate for literacy.

When Logan faced an unprecedented ‘spell-off’ against 12-year-old Vikram Raju from Aurora, Colorado in the final round of the 2022 Scripps National Spelling Bee, mom Priya Logan knew her daughter had an edge.

While the accomplishment of an Indian American kid comes as no surprise, Logan’s journey made history.  Scripps had eliminated her from the Bee during a multiple-choice vocabulary round, only to reinstate Logan after realizing her response was correct.  After that, she became the first Scripps National Spelling Bee champion to emerge victorious after prevailing a lightning-round tiebreaker spell-off with the runner-up. Logan correctly spelled 22 of an attempted 26 words in 90 seconds, finishing off with her winning word: ‘moorhen.’ 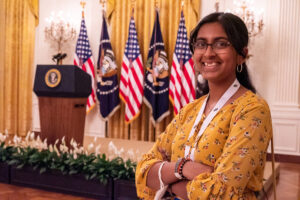 Harini returns to the White House this month

“I had been preparing for this high-pressure endurance test for the last six years. Even though I consistently placed 2nd in many online competitions, I had never won a national-level bee before this one. Sometimes, it could get a bit frustrating, but I kept persevering, and it paid off.”

Following her historic win, Logan began a whirlwind rockstar style media tour, sponsored by Scripps.  In Washington, DC, she enjoyed a private tour of the White House with her fellow 2022 Finalists. After arriving in New York, she appeared on Live with Kelly and Ryan before ringing the closing bell at Nasdaq. In Los Angeles she faced off against Jimmy Kimmel with hilarious pronouncers Guillermo and special guest Mike Tyson on Jimmy Kimmel Live!

Mothers Worldwide Were Watching and Listening 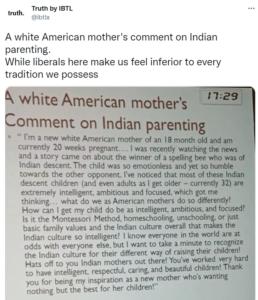 “What do we as white American mothers do so differently?” tweeted a 32-year-old mom, impressed by Harini Logan’s focus, humility and poise.  “How do I get my child to be as intelligent, ambitious, and focused?”

So, what is the secret behind Harini Logan and other champs?

In their exclusive interview with SarisToSuits®, Priya and Harini Logan shared their journey to success, sacrifices along the way, and Priya’s views on parenting.  Harini, who just joined St. Mary’s Hall high school, began her Bee journey when she was 8 years old.  Harini noted that it was primarily linguistic mastery, consistency, discipline, hard work and relentless passion that helped her crack the bee.

Priya credits the Montessori methodology of learning that they chose for their daughter.  Harini was allowed to make her own choices and pursue her other interests, with reinforcement of the significance of education.

Indian families, in majority of the cases, provide a nurturing and stable environment, with low divorce rates.  In general, families work together as a unit, with kids looking up to their parents as role models/coaches. Priya often took it upon herself to research and quiz Harini, encouraging her husband Anjaneyulu to join in when he could.  She encouraged her 6-year-old son, Naren, who wants to follow in his sister’s footsteps, to help with memorization. 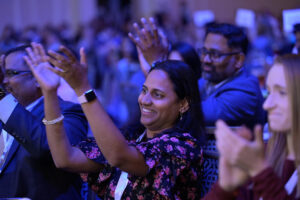 Each member has to be fully committed to the family affair, she says. “For a kid to be successful in spelling, most definitely one of the parents has to be equally committed because spelling is a family affair. It impacts every small decision we make to whether we go to a weekend party or not to big decisions such as summer family vacation planning etc. There are sacrifices that the kid and the family make as the speller navigates and masters the art of spelling. We are all in it or all out!.”

When Harini participated in the Bee for the first time, she came in at 323rd place and was not sure if she was fit for it.  But Priya cheered her on to instill the values of hard work and dedication, and to teach her ways to handle success and failures.

Being bilingual can also play a role in developing the ability to spell. Indian families tend to be multilingual, sometimes with each parent speaking different languages, as in the case of Priya. Harini was exposed to Tamil, Telugu, English, and Sanskrit, since birth. Spelling is a global sport of sorts, connecting to languages and places across the world.

True-to-life Immigrant stories of arriving with not much more than $200 in their wallets to study and to eventually become tech CEOs, scientists, or doctors are often shared about the promise of the American dream, and ways they give back to America and India.  These stories serve as inspiration to the kids who hear firsthand experiences from their parents.  The stories also encourage healthy conversations about perseverance and patience that pave the way to their goals. The Logan family, despite their heavy schedule, always ensured they visited their families back in India at regular intervals. The kids learned to appreciate values their parents talked about even more, from their grandparents and relatives.

*A Balancing Act:  Cultural Competency as an American-born 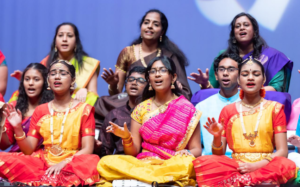 Indian culture and traditions also play a huge role. The Netflix series Never Have I Ever opened with the protagonist Devi praying to the gods with a book at the altar at the beginning of the school year. Books and education are revered and worshiped in the form of goddess Saraswati, who represents education, creativity, and music. In fact, to think of one’s parents and teachers as worthy of worship is a part of the Hindu tradition. The Taittriya Upanishad (one of the sacred scripture of Hindus) states in Sanskrit “Maathru Devon Bhava; Pithru Devo Bhava; Aacharya Devo Bhava; Athidhi Devo Bhava,” which translates to “honor thy Mother as God, honor thy Father as God, honor thy Teacher as God, honor thy Guest as God.” Parents such as Priya and Anjaneyulu have grown up with these values and kids like Harini learn them early on. The respect and placement of parents, teachers and guests at the highest order inherently encourages kids to learn and understand better from someone they hold high regard for.

Priya credits the NSF Foundation for helping Harini with the nuances of navigating the Bee.  NSF is like a minor league spelling-bee circuit for Indian Americans that has become a training ground for future spelling superstars. There’s even a documentary on this endearing story, “Spelling the Dream.” 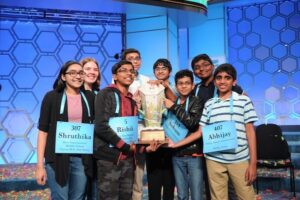 2019 Octochamps: The winners after dictionary runs out of words. Seven are Indian-Americans.

Spelling Bee is a sporting event of sorts for brainiacs:  Balu Natarajan created history when he correctly spelled the word “milieu” to win the 1985 Scripps National Spelling Bee. Subsequent 26 Indian American Bee champions drew inspiration from each other to participate and win championships and scholarships.  A rapidly growing Indo-American population, which has swelled north of 4 million, has produced 21 of the past 23 champions. One of the two exceptions was Zaila Avant-garde, 14.  (And the Scripps competition was canceled for the first time since WWII in 2020 because of the pandemic).  When Zaila won the Bee in 2021, she became the Scripps contest’s first Black champion from the US. 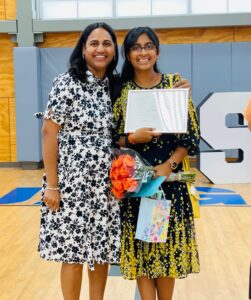 Like Harini’s parents, a reported 40% of Indians in America have postgraduate degrees. The story and success of the Logan family, and the Indian diaspora in general, which has ruled the roost for two decades, bring forth many pertinent questions about the secret to success for these Bee-kids, cultural competency, and the parenting style that leads to this success.

To the white Mom who tweeted kind words praising Indian parenting style, Priya says we want the same thing– to equip children with the tools to maximize their fullest potential.

“American and Indian parenting each have their own pros and cons. Building independence early on, life skills and the emphasis on sports that American parents inculcate in their kids is something that I look up to them as an Indian mom… And for reasons such as importance to our culture, teaching the importance of hard work and academic excellence early on are some of the attributes of parenting we excel in.  So, it’s all about taking the best of both cultures and finding the right balance in giving a nurturing environment to raise happy, healthy and successful kids.”

A chance to celebrate an extraordinary Texan teen one week following the Uvalde mass shootings was especially welcome.  Scores of people greeted the Logans with a fanfare at the airport upon her return to San Antonio.    Scripps is credited for honoring gifted children and teens since it began sponsoring the competition in 1941.  The National Spelling Bee officially launched in Washington DC in 1925, nearly a century ago. 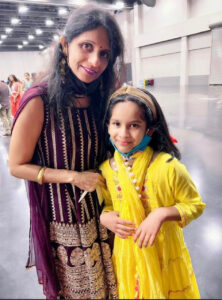 SarisToSuits Omniscient Perspective contributor Jyothsna Hegde holds a Masters Degree in computer science from Loyola University and an Engineering Degree from India. She works in the IT field and committed to serving her community.  As a mother of an 8-year-old high achieving daughter named Aarna,  Jyothsna tries her best to strike a balance between family and work, while also helping her daughter appreciate her Indian roots/traditions as much as she does the American culture.

Founded by journalist/entrepreneur Patti Tripathi, Atlanta-based SarisToSuits® focuses on building awareness to break down the barriers that constrain the advancement of women and girls.  We aim to advance women’s empowerment, education, gender inclusivity, equality and social justice.

Previous:
Trailblazing Atlanta Symphony Violinist Defies Cultural Norms for Career and Marriage; poised to launch Concerts for a Cause 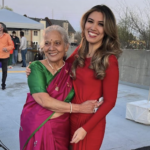 Next:
Bestselling Author Roshani Chokshi Credits Her ‘Ba’ for Inspiring Storytelling with Tales of Indian Folklore, Mythology and Great Epics